Leading a Group Through Losing
Written and contributed by Dr. Chris Hobbs ( Follow him on Twitter @Dr_ChrisHobbs)

My experiences in high school, college, and career have always revolved around athletics. As a result, my days almost always end with the stress of competition. There is a 50/50 chance that I will go home every evening dejected from a loss or exhilarated from a win. Even as an athletic administrator, this remains true as I feel many of these emotions on behalf of my coaches. This provides daily case studies on leadership that are crystal clear. The scoreboard has a way of making life pretty black and white. I have found that losing and struggle is where great leadership is most often demonstrated. Teams don’t really need their leader when it is going well. Teams are desperate for a leader when it is going poorly. I think this has a very easy application to teams of all kinds and losing of all kinds. Businesses, churches, non-profit organizations, and families will all experience the stress of losing. Here are 4 simple ways to lead well when it feels like you and your team are losing…

Be hopeful that better days are coming because they are. I am not talking about a faked, contrived, naïve insanity. I’m talking about a hope that comes from a commitment to keep pursuing mission and adapting plans that will yield better days. Along the journey, there will be bad days AND good days. Leaders find a way to look through the bad days knowing that good days will come back around. Remind your team of the mission, communicate changes to the plan to make the mission, and reassure them better days are coming…with a big smile on your face.

Bring the most energy when there is a lack of energy. In an athletic team setting, there are two people that have to be high energy every day: the head coach and the best player. If those two people are high energy, the group is likely to reach its fullest potential and pull through losing streaks. 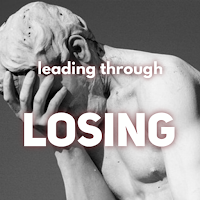 The more people on your team, the more empowered they need to be by trust and loyalty. Insecurity flares fast when losing shows up. Teammates start pointing fingers, and stop communicating with each other. The leader should express belief in the abilities of the people that they are serving both privately and corporately.

Demonstrate determination to push through the losing streak. Losing makes you question whether or not the pursuit is worth it. With those questions comes the temptation to cut corners. Evaluate what you would do and how long you would do it if you were winning. You

Should do the exact same thing when you are losing. The people you lead are looking for either a reason to give in or an inspiration to keep going. The leader will be one or the other.

I want to close with an excerpt of a letter written by General George Marshall to another general. The letter is written more than two decades before General Marshall became famous for his leadership during World War II and was named Secretary of Defense under President Truman. It demonstrates General Marshall’s belief in how to lead when it appears the team is losing…

My Dear General Mallory,
Last summer during one of our delightful rides I commented on the advice I would give a young officer going to war, based on my observation of what had constituted the success of the outstanding figures in the American Expeditionary Forces, and you asked me to write out what I had said. A discussion with Fox Conner this morning reminded me of my promise to do this, so here it is.

To be a highly successful leader in war four things are essential, assuming that you possess good common sense, have studied your profession and are physically strong.

When conditions are difficult, the command is depressed and everyone seems critical and pessimistic, you must be especially cheerful and optimistic.

When evening comes and all are exhausted, hungry and possibly dispirited, particularly in unfavorable weather at the end of a march or in battle, you must put aside any thought of personal fatigue and display marked energy in looking after the comfort of your organization, inspecting your lines and preparing for tomorrow.

Make a point of extreme loyalty, in thought and deed, to your chiefs personally; and in your efforts to carry out their plans or policies, the less you approve the more energy you must direct to their accomplishment.
The more alarming and disquieting the reports received or the conditions viewed in battle, the more determined must be your attitude.

Never ask for the relief of your unit and never hesitate to attack.
I’m certain in the belief that the average man who scrupulously follows this course of action is bound to win great success. Few seemed equal to it in this war, but I believe this was due to their failure to realize the importance of so governing their course.

‘Bite Down and Don’t Let Go’ is a collection of writings on being intentional about life in a way that produces great persistence. Read about it more here.

Dr. Chris Hobbs is an educational leader and Director of Athletics at The King’s Academy in West Palm Beach, Florida. He’s earned a few degrees and won some awards. He’s happily married to his high school sweetheart and they have three teenage children. Life is messy and complicated most of the time. You can follow him on Twitter for all sorts of inspirational thoughts and good laughs.